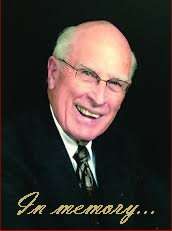 Ward Childerston announced his retirement from WCRH radio in April of 2005 after serving as general manager since 1986.  A native Nebraskan, he never thought he’d be in Maryland.  “My plans were for farming and ranching.  I never thought or planned on operating any radio station.”

A graduate of Grace Bible Institute in 1954, Childerston started in television in Omaha where he worked for two years. Starting as a floor manager he was on a quick path to management in an industry that offered a tremendous future.  However, he felt strongly convicted to leave TV and to serve the Lord.  This call lead him to pastor a church in Curtis, Nebraska for two years.

It was during this time that Ward felt the call to radio, but not to where he had expected.  He and his wife applied and were accepted as missionary candidates to Manila, the Philippines, under the Far East Broadcast Corporation.  However, due to health reasons, this opportunity was never realized, and another avenue of service was pursued.

This decision lead him to North Platte, Nebraska, where he assumed the duties of an announcer at KJLT.  After a quick eight months, he became the coordinating manager.

Reflecting back on these early days, Mr. Childerston said that these were the days of 78 and 45-rpm records and reel-to-reel tape.  “The change in technology is astonishing.  There were no transistors, it was all tubes.  FM stereo was not commercially available and 33 1/3 LP records were just starting.  But what has remained constant is the personal contact with the listener.  There’s a near intimacy that develops because you are invited into people’s homes and lives and become part of their family.”

In January of 1966, a return move was made to Omaha where Childerston started KGBI.  He looked back on this time as his most memorable work.  “It was a thrill to start KGBI….to organize, to develop the original programming and to give it to an audience that didn’t have any knowledge of Christian radio.  It was exciting and gratifying.”  He went on to state, “There were people I met in churches and at other events who said they never listened to radio at all!  Then a year or two later these same people would say they never shut the radio off.”

In 1986, feeling that the Lord was calling him to another ministry, Ward made the move to Maryland to become general manager of WCRH.  Once again, he stated that it was exciting to watch God work and present new opportunities for which he was not trained. He believed that God gives certain individuals gifts and opportunities to hone and use for His purposes.

When asked about his plans for retirement, the then 70-year-old Childerston just smiled and chuckled.  “My purpose is to live the rest of my life for the will of God – that’s where I am – to be available for whatever.  I have no idea but He’ll give me the health, strength, energy, and ability for whatever he has in store.  I’m looking forward to it.”

Ward also had great influence as a board member of the Hagerstown Rescue Mission, Young Life of Frederick County, and Joy El Ministries.  He was very active in prayer groups and Bible study.  We here at WCRH called him “boss”, friend, and mentor.  He was deeply loved.

Today’s programming is provided by

in memory of Darlene Pryor on her birthday.

Want to be a sponsor at WCRH?Learn More